Bruno and Beth Sene served as pastors at the Paz Church in Barueri, São Paulo. Beth is the second daughter of mission directors Jeff and Becky Hrubik, and grew up in Santarem, on the Amazon. Every since she was a child, she loved missions and wanted to work full-time for the Lord. 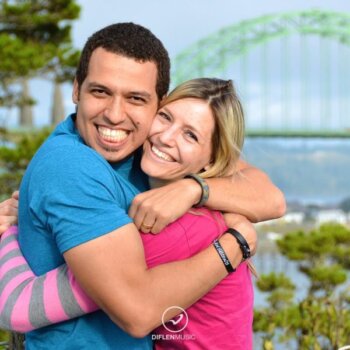 Bruno was born and raised in São Paulo. At the age of 17, God put a deep passion in his heart to be involved in the Lord’s work. During his college years, the Lord opened the doors for him to do a year of Bible school at Elim Bible Institute. There, he met Beth and they became best friends. After returning to São Paulo, Bruno finished his degree in Business Administration. In 2007, Bruno and Beth were married and began their life together in Barueri!

Already very involved with the local church, Bruno and Beth were ordained pastors in 2010. They were involved in cell groups, with over 180 cells under their covering, and one-on-one discipleship. By the grace of God and through God-given strategies, they saw the youth/young adult ministry called DIFLEN (DIscipling and Forming Leaders in Every Nation) grow from about 40 people to about 2000! Then, in 2013, a huge challenge and oportunity was presented to them. They were invited to join a team that would be sent to Japan to help grow a youth/young adult-oriented Paz church plant. After receiving God’s confirmation and transitioning their work in Barueri to other capable leaders, they joined the Japan team!

2014 was the year of the big move! They had their two-year-old son Paul (born in São Paulo in 2012), and Beth was about 6 months pregnant with their second son Daniel (born in Japan in 2014). They began studying the Japanese language, and became fully involved with the cell groups and one-on-one discipleship at Paz Church Japan. Similar to their work in Brazil, they were responsible for overseeing the church’s Media, Worship, and Youth/Young adult ministry (DIFLEN), as well as the Children’s ministry.

2018 was another year for big changes! In February, Sammy was welcomed to the family! As the year progressed, Bruno and Beth felt the Lord leading them to go back to Brazil. The church in Japan was now strong and had a solid leadership team. Meanwhile, their PAZ Church in Barueri, São Paulo, was going through transitions with the worship ministry, and the head pastor invited Bruno to return to Brazil and once again lead the worship team. After much prayer and talking with their leadership, Bruno and Beth moved to Brazil in August of this same year.

Currently, Bruno and Beth are serving as assistant pastors at PAZ Church Barueri, in Brazil. They are responsible for the worship and media ministries, as well as the young adult ministry. They continue to be very involved in cell groups and discipleships as they also raise their three boys to love God and the Church.

Bruno and Beth’s passions include raising up strong Christian leaders in the local church, drawing people into deeper intimacy with God through worship, and raising up an army of young people that are bold and passionate for Jesus! They love their family and love living for Jesus where ever they may be in the world