Becky and I grew up worlds apart, Becky in Brazil and I in the US.  Becky was supposed to be born in Brazil, but her mom had miscalculated the delivery date.  So, on December 3, 1955, the day her parents were to leave Miami for Brazil, Becky ended up postponing their trip for two months with her arrival into the world! 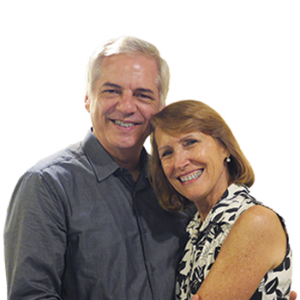 I was born 3 years earlier on May 22, 1952, in Richmond, VA, and lived in Virginia until my graduation from Virginia Tech as an electrical engineer in 1974.  Although raised in a Christian home by incredible parents who loved the Lord with all their hearts and taught us Godly values, my time at Va. Tech was transformational as God met me in such a personal way.  He dealt with my life’s values, motivations, and purposes.  During the summer between my junior and senior years, I met Becky, who had come to the US to attend college.

Becky had the wonderful privilege to grow up on the mission field helping her parents in all aspects of church planting.  She has amazing stories from her childhood of the adventure and trials they faced as their family pioneered the planting of many churches and sometimes with persecution.  She attended a private American school but when her parents moved to a different location, she finished her schooling at a New Tribes Mission school with one year being spent at their school near Manaus in the middle of the Amazon basin.

Becky then came to the US to begin college.  She received an associate degree in Bible at Columbia International University in Columbia, SC, and then moved to Peoria, IL, to study nursing in preparation for her calling to be a missionary nurse.  However, during her first year I asked her to marry me and, after getting her family’s blessing, she said “yes” and our lives have never been the same.  That was 1976 and after having worked for DuPont for two years in Wilmington, DE, I was being transferred to Wilmington, NC for my next assignment.  We were married on June 12, 1976 in Peoria and moved straight to North Carolina.  Becky was accepted at the University of North Carolina and finished her nursing degree and became an RN.

I was transferred back to Newark, DE on another assignment.  Becky worked at a hospital across the border in Maryland until the birth of Ruth on August 12, 1979.  Becky then began working only one night a week to keep abreast of the nursing field but dedicating herself to being a stay-at-home mom to raise our kids.  Beth came along on February 20, 1981, as we were finishing up our plans for Brazil.  After turning in my resignation to DuPont and making our final visits to friends and family, we left for Brazil arriving on March 5, 1982, in Santarem.

Our younger two children were born in Santarem–Paul on August 31, 1984, and Debbie on May 5, 1988.  It has been so rewarding seeing all four kids grow in the Lord and be so involved in the Lord’s work.  From traveling on river boats to start churches in the remote regions of the Amazon to leading cell groups and being involved in church ministries, all have developed a passion for the Lord’s work and souls.

All four are now married with families of their own and serving with PAZ International—three in Japan and one in Brazil.  You can check out their bio pages to catch up with their lives:  Nate & Ruth Reutter, Bruno & Beth Sene, Paul & Priscilla Hrubik, and Ben & Debbie Block.

Becky and I would love to keep in touch with you all.  Please drop us a note at hrubik@myfastmail.com