Ken is the son, grandson and great-grandson of missionaries and is also the third generation of his family to serve God in Brazil. He was even born in Brazil, in the city of Registro, São Paulo in 1972. In 1978 his parents went to Rondônia to plant churches, where he spent a good part of his childhood. When he was 16 and in high school, he moved to Canada. Later, he studied at Prairie Bible College. He also studied computation at the South Alberta Institute of Technology. 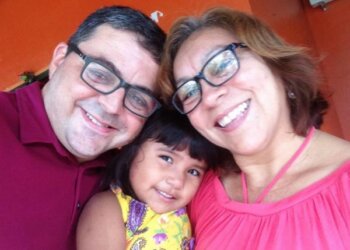 From 2000 to 2008, Ken was a missionary under the covering of South America Indian Mission, serving in the Ami Training Center, located in Chapada do Guimarães in the Brazilian state of Mato Grosso. They train indigenous people to be committed leaders. He helped in the maintenance of computers and later in accounting.

In January of 2008, after getting to know Isaura and Project Amazon through mutual friends, Ken visited Santarém, where he went on a missions trip on the Amazon and Arapiuns Rivers. In April of 2009 he visited a second time, this time to get engaged with Isuara, believing that this was the perfect will of God.

With the support of his church in Canada, Ken joined Project AmaZon and soon after moved to Santarém. In December of 2009 he married Isaura to, together, serve God in the Amazon. Now he currently works with PAZ on the medical team, also helping with water filter ministry.

Isaura is a native of the Brazilian state of Pará. She was born in Santarém in 1967, the daughter of Manoel and Ilza Pereira. Her parents passed away when she was still a child, making her childhood and adolescence very difficult. She gave her life to Jesus in the beginning of 1990, in Rio de Janeiro, where she was living with relatives. She returned to Santarém in ’91 and soon after began attending the local PAZ church.

In 1992 she participated in PAZ’s Bible Seminary, also doing an internship for 4 months on PAZ’s health boat Portador da Luz (“Bringer of Light”). In 1993 she felt a call to full time missionary work and began to help PAZ in the office. Soon after she began to work in health ministries as well as teach local workers. In ’96 She was sent with a medial team to the PAZ base in Belém where she served in several capacities, even pastoring a church!

At the end of 2002 she returned to Santarém to work in the office as the secretary while taking a basic nursing class. Her internship, once again, was onboard the Portador da Luz. During this time, Isaura felt a strong confirmation to her call in medical missions. So in 2005, she enrolled in a local university to gain her nursing degree, and in 2009 graduated!

Now Isuara helps coordinate the Health Ministries at PAZ’s Santarém base. PAZ takes physical and spiritual health to the needy communities in the Amazon Basin and greatly helps in the planting of more churches.