PAZ missionaries Tim and Christine Huber work with PAZ Japan, a missions outreach of PAZ headquarters in the Amazon. Tim started planting churches in Japan in 1987, and Christine joined him in 1997 when they were married. 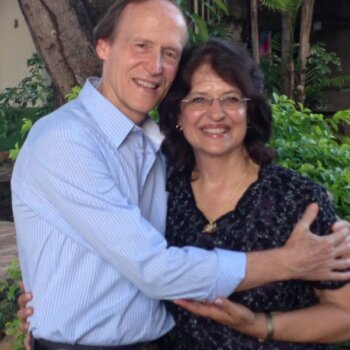 Tim grew up in southern Brazil, the son of missionaries Melvin and Katherine Huber. Christine’s parents, Curtis and Estelle Bunney, were missionaries to the Apache Indians in San Carlos, Arizona, where she grew up. Christine was formerly married to Tim’s older brother, PAZ founder Luke Huber, who died in 1994 when his small plane crashed in the Amazon.

Luke and Christine raised four children in the Amazon: Sarah (husband Andy and three children), Esther (husband Aaron and two children), Josiah (wife Jennifer), and Isaiah. All four children are involved in, or preparing for, mission work. The grandchildren are learning they have two Grandpa Hubers, one in Heaven and one in Japan!

Tim worked in church-planting with PAZ in the Amazon for five-and-a-half years before starting the work in Japan.

“Japan is one of the largest unreached people-groups in the world, since only about 0.3 percent of the population are evangelical Christians. PAZ currently has two churches in Japan, with several starts just getting underway. With a strong emphasis on small groups and personal one-to-one discipleship, our goal is to train church-planters to be sent out to different areas of Japan, and also to other countries. In addition to the work in Japan, we are reaching out to Muslims in Indonesia.”

Tim and Christine invite you to pray about coming to help PAZ Japan! Most Japanese have never met a Christian before, or read any part of the Bible. Many don’t even believe that God exists.